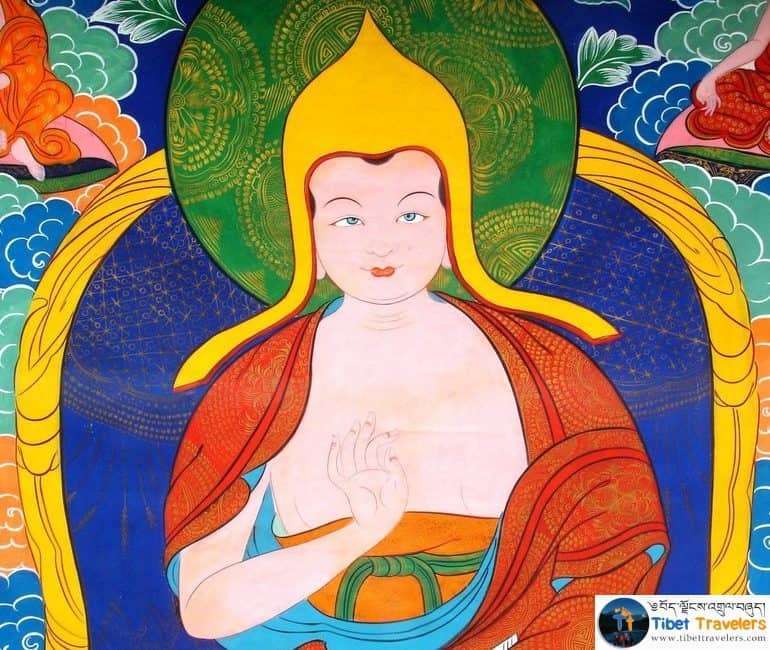 Jetsun Tsongkhapa is the founder of the Gelukpa school of Buddhism in Tibet.

Tsongkha is the name of the place in the Eastern Tibet Amdo area where he was born.

Jetsun Tsongkhapa was born in the year 1357 during the 14th century.

At the age of three, ordained as a layman vow by the 4th Jetsun Karmapa Rolpey Dorjee.

At the age of seven, he received the ordination of renunciation from the first Abbott Dhondup Rinchen of Jakhyung Monastery in Amdo.

Later at the age of around sixteen, he traveled to central Tibet for deeper teachings on Buddhism.

At the age of twenty-four, he was fully ordained as Gelong under a master from Sakya school.

It is said that he had followed around a hundred masters from Buddhism in Tibet such as masters from Nyingma school, Sakya school, Kagyu school, Jonang school, Shije school, and Kadam school.

Jetsun Tsongkhapa is one of the Tibetan masters who became a well-known scholar at a very early age.

He started composing the teachings at many retreats areas near Lhasa.

Because of his great wisdom, he gained many followers and he started giving teachings to all the disciples including the lay-people. 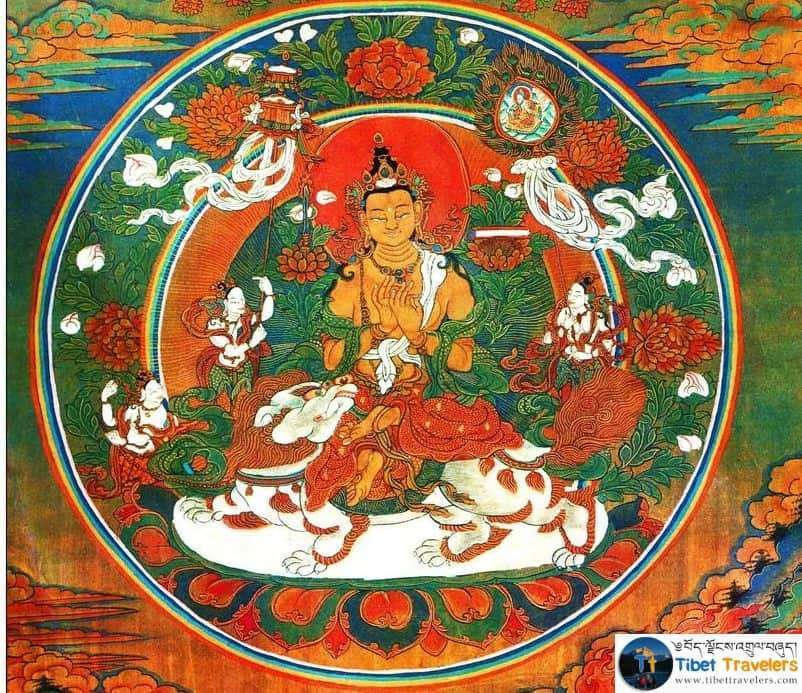 One day when he was teaching the Dharma near Lhasa, the wisdom Buddha Jamphelyang ( Manjushri Bodhisattva ) appeared in front of him and gave him a few teachings on emptiness and the middle path.

Manjushri Buddha asked Jetsun Tsongkhapa: Son, do you understand the essence of these teachings?

Jetsun Tsongkhapa replied that he didn't understand the essence of the teachings from Manjushri.

Manjushri Buddha has given prophecy for him to go retreat at Woka valley for purifying the past life karmic debts, only then he can understand the essential teachings from Manjushri Buddha and he can benefit more Sentient Beings.

Jetsun Umapa is the translator between Jetsun Manjushiri and Jetsun Tsongkhapa.

Jetsun Umapa is also known to be one of the masters who can have face-to-face chats with Manjushri Buddha.

Jetsun Umapa request Manjushri Buddha that Jetsun Tsongkhapa is too young for retreat and people might talk negatively about him if he goes early age for a retreat without learning deeper about Buddhism.

Jetsun Manjushri said: if we listen to all the people, they are people who are also talking negatively about Buddha Shakyamuni.

Jetsun Umapa was given a prophecy to travel to eastern Tibet Kham.

Later Jetsun Tsongkhapa has traveled towards the Lhoka area at South East from Lhasa.

On the way to Woka valley, eight disciples followed him.

Jetsun Tsongkhapa met an old lady on the way to the retreat near Woka village. The old lady offered him butter, yogurt, cheese, and milk.

Jetsun Tsongkhapa said: It's very auspicious. Oh mother, what are the names of this place and that mountain?

The old lady replied: The name of this retreat is Choelong, and the name of that mountain is Dongre. Choelong means Buddha Dharma Prophecy.

The old lady disappeared and she was the emanation of the female Buddha Green Tara Jetsun Drolma.

When he arrived at the Choelong Choesam retreat area, the rains of the flower were all over the valley. The meditation caves were built by the spirit as an offering for him and his disciple. At the Woka valley, he met another master namely Jetsun Namkha Gyaltsen.

After the arrival of the Jetsun Tsongkhapa, the retreat area was covered with rainbow most of the time, and different types of lights coming from the sun has shocked the governor at the Woka Choelong village.

The governor of the valley send a servant to check what had happened over there?

The servant said: There is nothing there except eight pilgrim meditators.

The governor cried with devotion and said: They are not just ordinary pilgrims, they are the Buddhas.

The governor told all the villagers to go towards the mountain with him for the blessings from the Buddhas.

After meeting the Jetsun Tsongkhapa, the governor asked: Who are you? and what is your name?

Jetsun Tsongkhapa replied jokingly: I am from Amdo, my name is 'the big nose Amdo man. '

The governor cried once again with great devotion. Please stay at this retreat area, I will be your sponsor.

The governor cried once again and Jetsun Tsongkhapa doesn't want to make the governor feel bad so he asked the governor, who are you, and what is your name?

The governor replied: I am the governor of this village. My name is Tashi Gyaltsen Tashi Lhundrup.

Jetsun Tsongkhapa was very pleased to hear the name of the governor and he replied: your name is very auspicious. Even though I don't need a house, to flourish the Buddha Dharma, you can build a monastery.

The governor built the monastery with a lookalike statue of Jetsun Tsongkhapa. The statue is known as wish-fulfilling.

At the Choelong retreat area, Jetsun Tsongkhapa has offered three hundred fifty thousand mandalas on a stone even until his hands were bleeding with bones coming out from the lower palm.

Jetsun Tsongkhapa has offered three hundred fifty thousand prostrations on a stone even until making prints of the body on the stone.

The hardship and the diligence were the main cause for his great realization of Buddhism. 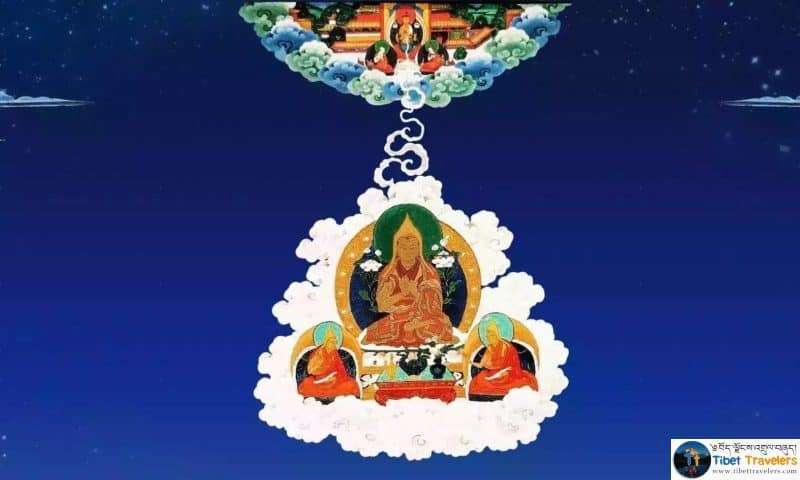 At the beginning of the early age, he was criticized by many Tibetan scholars. Later many of them praised him after reading his greatest composed of eighteen volumes teachings on both sutra and tantra.

Jetsun Tsongkhapa has many great disciples including the first Dalai Lama and the First Panchen Lama.

Jetsun Tsongkhapa is known as one of the three emanations of Wisdom Buddha Manjushri. The other two are Jetsun Longchenpa from Nyingma school and Jetsun Sakya Pandita from Sakya school.

Jetsun Tsongkhapa is the founder of the new Kadampa school known as Gelukpa. Meaning the pure path follower.

Jetsun Tsongkhapa is known to be one of the wisest and most compassionate Tibetan masters. The reason for his hardship and diligence practice on Buddha Dharma was to find the easiest path to enlightenment for Sentient Beings.

The teachings on emptiness and middle path are very difficult to understand for normal people, because of his great compassion, he wanted to explain the emptiness and middle path in a very easily understandable way and that is the reason he composed many teachings including Lamrim Chenmo ( full details on sutra path ) and Ngagrim Chenmo ( full details on tantra path )

The most popular teaching from Manjushri Buddha to Jetsun Tsongkhapa is Lamzo Namsum. ( The  three chief teachings on the path ) 1. Renunciation 2. Bodhichitta  3. Perfect view

Jetsun Tsongkhapa is known as the second Buddha by the Tibetans. His compassion is like an ocean and his wisdom is like a sky.

May Jetsun Tsongkhapa bless all Sentient Beings to the path of enlightenment.