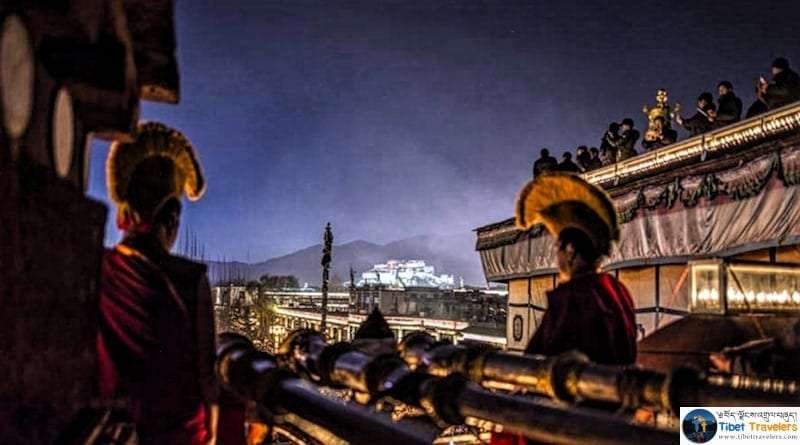 Jokhang Temple is the favorite temples in Tibet for many Travelers.

Previous Travelers shared that they can feel tremendous energy inside the Jokhang Temple.

Jo is a shorter version of Jowo. Jowo meaning lord or master in Tibetan. The name Jowo is normally used for precious Buddha's and Bodhisattvas.

Jokhang Temple can be traced back to the 7th century 33rd King Srongtsen Gampo.

The temple was built for the statue of the Buddha Shakyamuni at the age of 8th namely Jowo Akshobhya.

The Tibetan name of the statue is Jowo Mikyo Dorje.

The statue was bought to Tibet by the Nepalese Princess Brikuti.

History of the statue of Jowo Mikyo Dorje

In the legend, the history of the statue can be traced back during the time of the past Buddha in India (the 3rd Buddha ) Woesong Chenpo also known as Dipamkara and Marmezey.

There was a king namely Tritri who was a great devotee of Buddha Dharma.

The king sponsored the constructing of the statue of Buddha Jowo Mikyo Dorje to flourished the Buddha Dharma during the present Buddha Jowo Shakyamuni's ( also the 4th Buddha ) time as a prophecy. 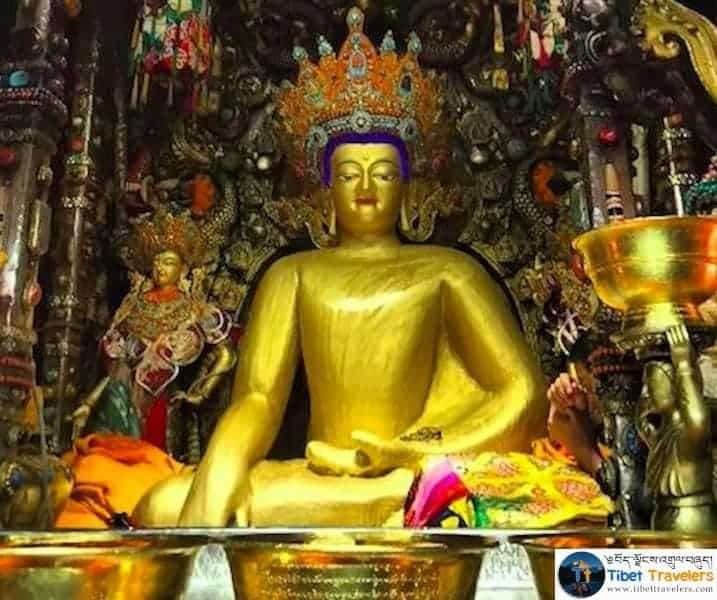 History of another Statue during the time of King Tritri

Another statue bought to Tibet by the Nepalese Princess Brikuti was the Tritri Jampa. The statue of the future Buddha Maitreya ( the 5th Buddha ).

This statue of future Buddha Tritri Jampa also has the history back to the past Buddha Woesong and King Tritri in India.

Tritri Jampa shrine is the main meditation deity of the King Tritri.

Nowadays this statue of the future Buddha is inside the Jokhang Temple on the first floor after the main chapel of Buddha Shakyamuni shrine.

History of Jhokang Temple during the 7th century

During the 7th century, Jhokang Temple was a lake namely Wotang Tso.

Princess Brikuti asked the expert in architecture Princess Wencheng about where to build the temple for the statue of  Buddha Jowo Mikyo Dorje.

Princess Wencheng replied with the area where the Wotang Tso lake to be the most auspicious place to build the temple.

Obstacles before building the Jokhang Temple

The Wotang Tso Lake was known to be the home of evil spirits so to remove the obstacles, Princess Wencheng threw her ring into the Lake and many miraculously happened including a stupa that appeared from the middle of the Lake as a sign of auspicious.

Another way to remove the obstacles is related to the white goats. The first soil on the Lake should be filled only by the white goat.

After many auspicious signs, the name of the temple became Rasa Trulnang Tsuklhakang.

Rasa means Goat and the soil.

In the present day, there is a Jowo Rama Karmo ( a face of a goat that appeared itself inside the temple ) as a blessing from the white goats. 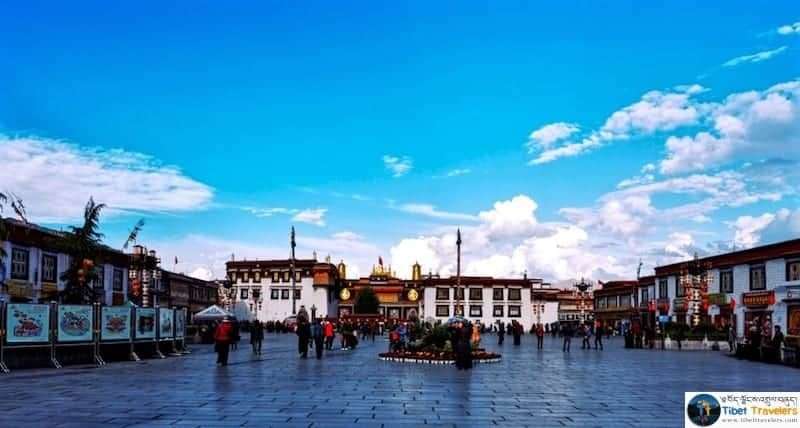 The specialties of the Jokhang Temple

Jokhang Temple is full of precious statues from different regions in our world.

Changes of circumstances during the 9th century in Tibet have let the statue of Buddha Jowo Mikyo Dorje in the Jokhang Temple be exchanged with the statue bought to Tibet by Princess Wencheng.

At the present day, the main shrine of the Jokhang Temple is the Jowo Shakyamuni at the age of 12 brought to Tibet by the Chinese Princess Wencheng from Tang.

The statue of Buddha Jowo Mikyo Dorje from Nepalese Princess Brikuti is at the Ramoche Temple.

Even though they are fewer pilgrims in the Ramoche Temple, still Jowo Mikyo Dorje's statue is full of blessings 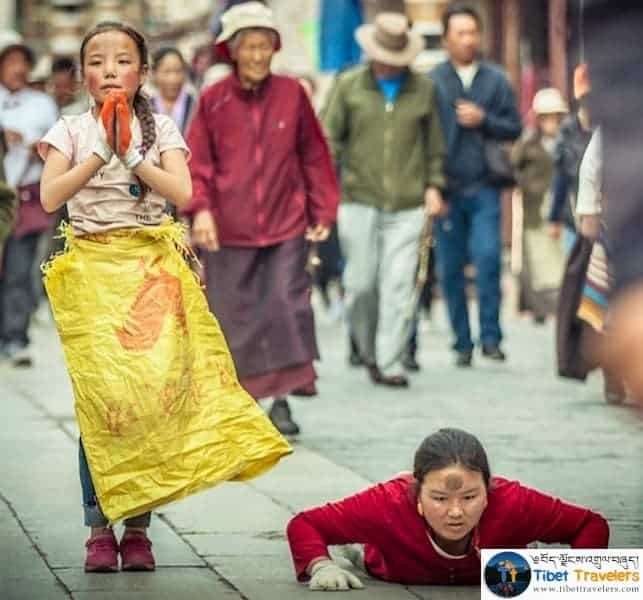 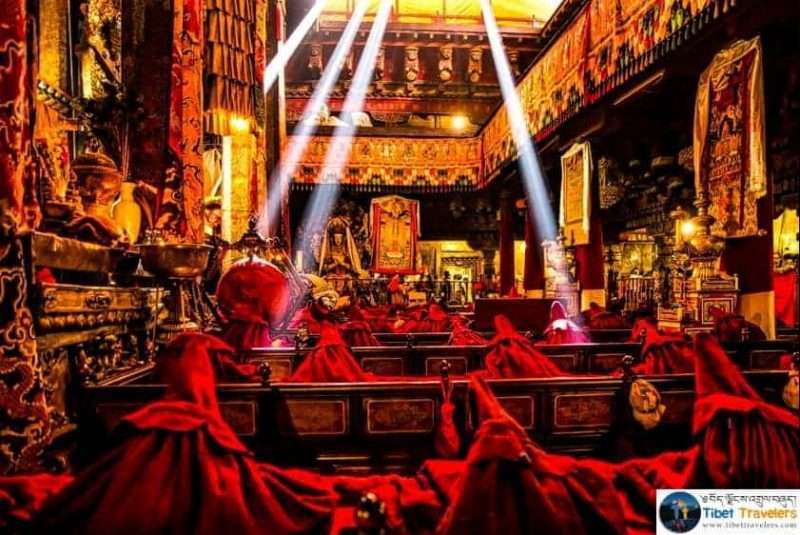 Photo: Inside the Jokhang Temple

Once when the great master Sakya Pandita visited the Jhokang Temple. On his arrival, the four guardian kings near the main chapel of Buddha were chatting. 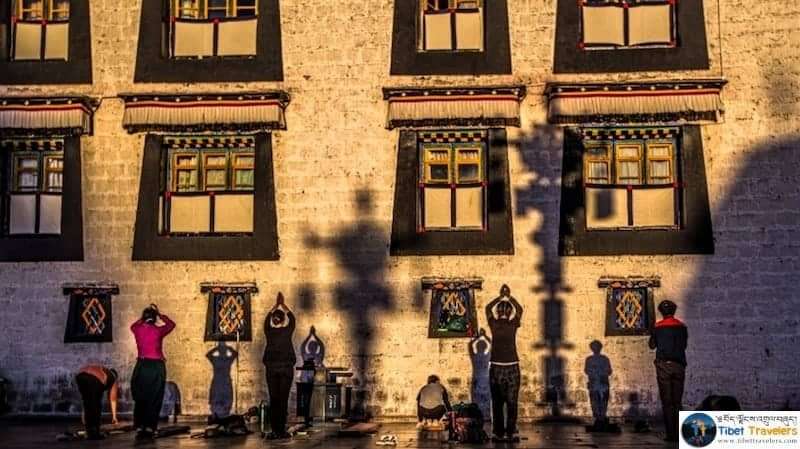 The main statue of Buddha Shakyamuni in the Jokhang Temple is known as the Trulku ( meaning Gelong ) fully ordained monk form.

Jokhang Temple is one of the main sightseeing inside Lhasa.

Local Tibetans will visit mostly in the morning for blessings.

For the local Tibetans from different villages in Tibet. When they visit Lhasa, if they didn't visit Jokhang Temple, they say it's similar to not visiting Lhasa so Jokhang Temple is very important for the Buddhist pilgrims. This is the home of Buddha in the heart of locals.

We highly recommend Travelers to visit Jokhang Temple as one of the most important temples in Tibet.

Thank you for reading Tibet Travelers' article on Jokhang Temple.

Travelers can send us Emails regarding traveling to Tibet and visiting Jokhang Temple. info@tibettravelers.com