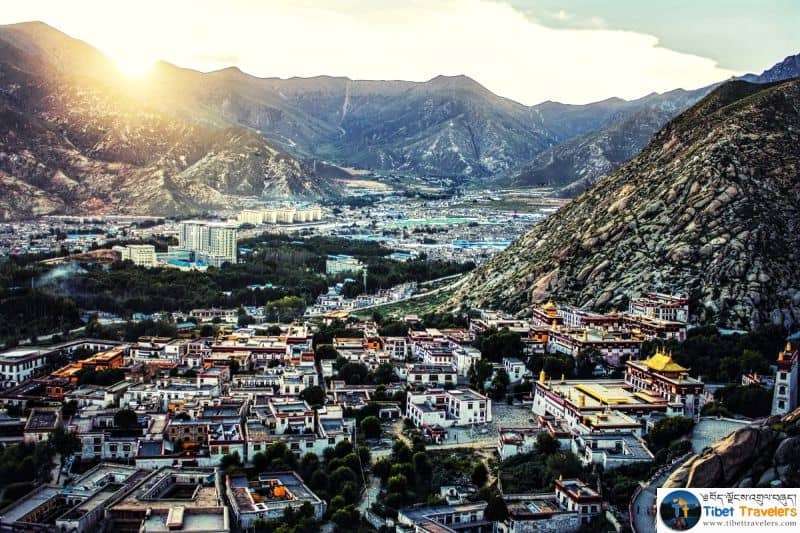 Sera monastery and Drepung monastery are the two biggest Geluk monasteries in Lhasa.

Sera monastery was built in the year 1419 by the great scholar Jamchen Choeje Shakya Yeshi with a request from his great master Je Tsongkhapa.

The monastery is located in the north of Lhasa city.

The founder of the Gelukpa school in Buddhism in Tibet was Je Tsongkhapa.

Je Tsongkhapa was born in the year 1357 in the eastern Tibet Amdo Tsongkha region. He had traveled to central Tibet during his teenage to learn Buddhism.

After learning Buddhism with more than 100 great masters, he had become a wandering Yogi having perfected in both Sutra and Tantra. It is said that sometimes disciples can't find him for many days when he was at the retreat in the mountains above Sera.

They are two retreat areas above the Sera monastery known as Sera Utse and Choeding Gang retreat area.  Je Tsongkhapa spent many years in these retreat areas via meditating, composing Dharma, and teaching the Dharma to the disciples. 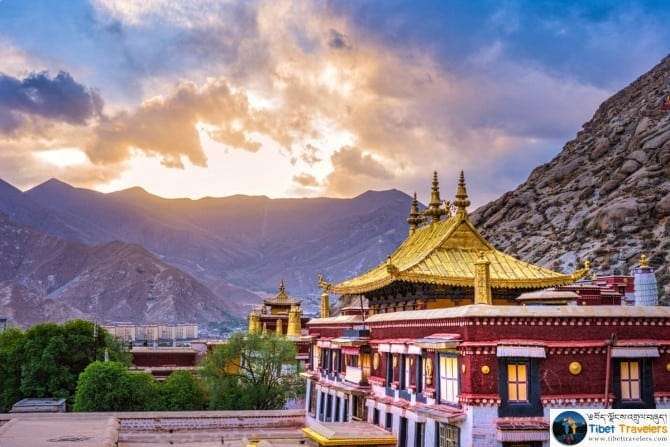 Je Tsongkhapa has many great disciples.

The five popular disciples of Je Tsongkhapa are:

One of the main disciples of Je Tsongkhapa. Je Jamchen Choeje was also the steward ( In charge of grand lamas tea and food ) of Je Lama Tsongkhapa.

Je Jamchen Choeje was born in Tsal Gungtang village near Lhasa.  His father was the founder of the Tselpa Kagyu school in Tibetan Buddhism. He became a monk at the age of seven under the great master Jamyang Shakya Gyaltsen.

The emperor of the Ming Dynasty was very impressed with the Dharma teachings from Je Jamchen Choeje so the Ming Dynasty emperor offered many precious gifts including the sandalwood statues of sixteen Arhats, silk fabric, and the black crown hat to show his respect to the great master Je Jamchen Choeje. Nowadays we can witness the beauties of this black crown hat at the Tantric college in the Sera monastery.

After traveling to Ming Dynasty once again. Je Jamchen Choeje was again offered many precious gifts from the emperor. While traveling back to central Tibet, he passed away in the Kham area. 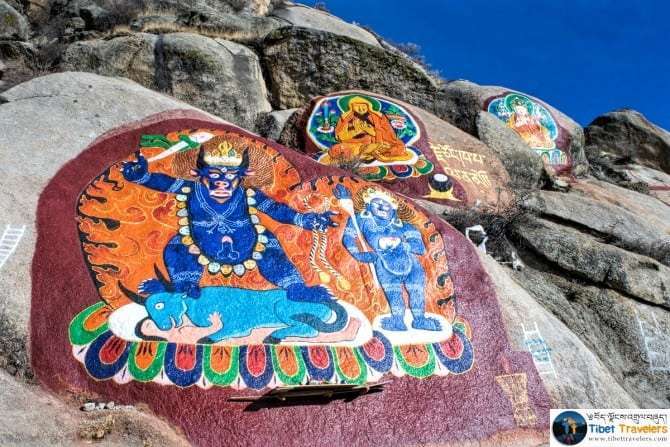 They are 32 sections in Sera monastery with three main colleges.

The students will learn the essence of five major basic texts rooted in Buddha Shakyamuni in the Je Dratsang and Mey Dratsang.

The students will learn the essence of the four sections of tantric teachings rooted in Buddha Vajradhara. 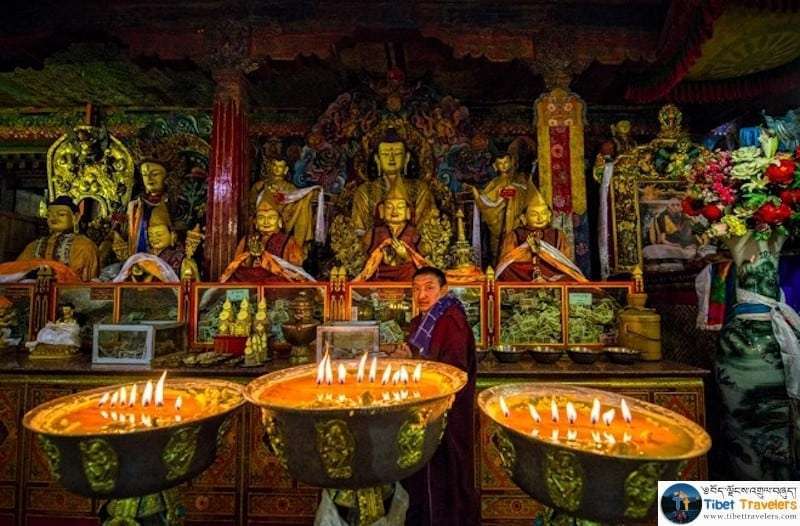 The specialty of Sera monastery 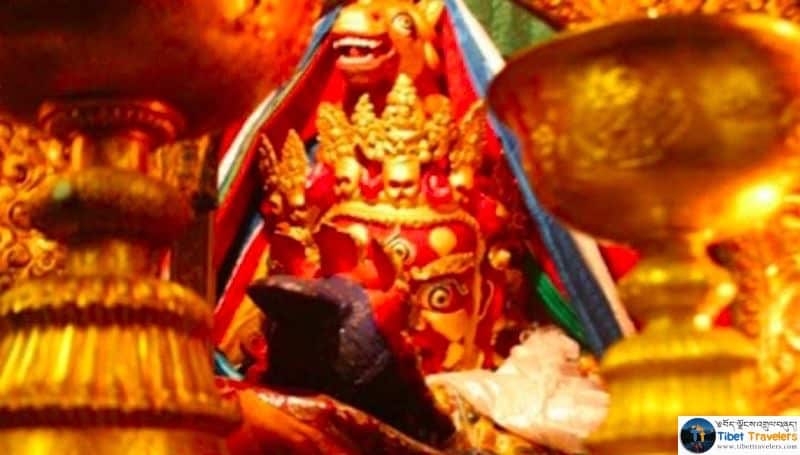 Also known as Hayagriva in Sanskrit is the emanation of the compassion Buddha Chenrezig in the furious form.

The history of Sera Tamdrin Buddha can be traced back to the Je Kunkyen.

Je Kunkyen is the disciple of Je Jamyang Choeje. ( Founder of Drepung monastery )

Sera Tamdrin Buddha is the main shrine of the Je College.

Also known as Yamantaka in Sanskrit is one of the three main deities of the Geluk school in Buddhism in Tibet. Yamantaka is the emanation of Wisdom Buddha Manjushri in a furious form.

The Jegjay Buddha in the Sera monastery is said to have some warmness in the heart as a sign of being inseparable from the Buddha Yamantaka.

The statue was built with much pea-size mud by Je Jamchen Choeje. Each pea-size mud contains 100 thousand mantras of Yamantaka. The statue has been blessed by the great Je Tsongkhapa himself.

Sera Yamantaka Buddha is one of the main shrines of Tantric college.

Thukjey Lhakang is the Compassion Buddha Temple on the second floor of the Assembly hall.  The statue was precious because the statue was the main deity of JowoJe Atisha Dipamkara. ( Founder of Kadampa School )

Compassion Buddha is known as Chenrezig in Tibetan. The Temple is known as a wish-fulfilling temple in Sera monastery. 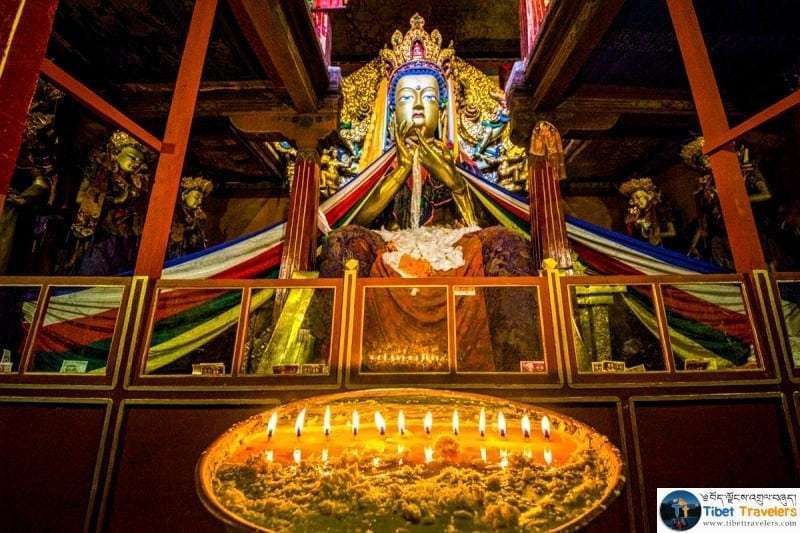 The Assembly contains many beautiful wall paintings with shrines of Buddha's and Bodhisattvas.

Sera monastery is the best place in Lhasa to witness the beauties of monks' debates. The debate happens in the afternoon from 3 pm to 5 pm every Monday to Saturday. They are around 200 monks during the debate.

The monk's debate is one of the greatest ways to practice patience and increase wisdom.

They are two big stupas in Sera monastery. The stupas are normally built to remember the Buddha Dharma and to acquire merit. Merit plays one of the biggest roles in Buddhism.

Sera bookshop sells many books from ancestors at a very low cost. The books are in the Tibetan language.

Sera Lingkor is a great way to see the landscape of Sera monastery and Lhasa city. There are around five kilometers.

Located above the Sera monastery on the hill. Once a retreat area of many great Tibetan masters including Je Tsongkhapa and his two great disciples Kedrup Je and Gyaltsap Je. 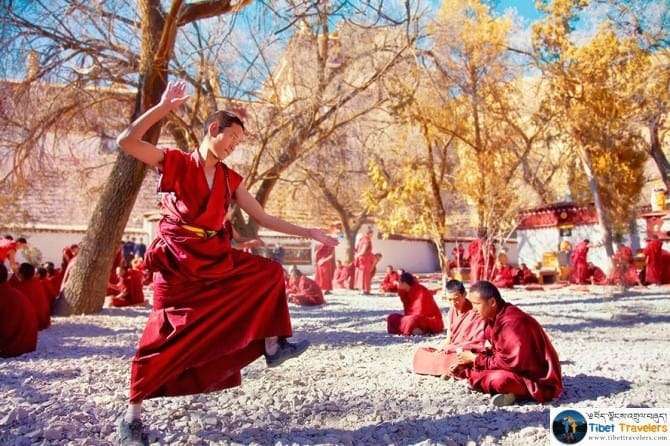 The tea and the food are quite good at lower prices. It is not as clean as the fancy restaurant. Sera monastery tea house is a great way to meet the local Tibetans.

Sera monastery is one of the three main monasteries of Geluk school in central Tibet Lhasa.

Sera monastery is one of the popular places in Lhasa to witness the monk's debate.

The entrance fee of the Sera monastery is 50RMB per person.

Photos are not allowed inside the Temple.

Sera monastery is the three main important sightseeing inside Lhasa after Potala Palace and Jokhang Temple.

Sera monastery is full of blessings from many great Tibetan masters.

Thank you for reading Tibet Travelers' article on Sera monastery.

For traveling to Sera monastery, Email us at [email protected]