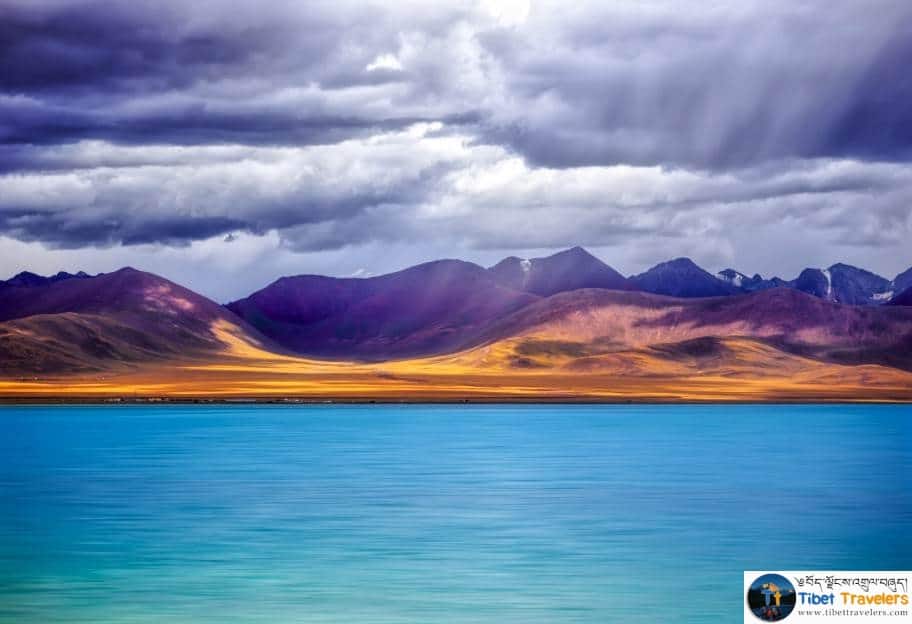 Yamdrok Lake is known as Yamdrok Yumtso or Yamdrok Yutso Lake in the local language.

Yamdrok Lake is one of the three largest salt lakes in the Tibet Autonomous Region including Namtso Lake and Manasarovar Lake.

Tibetans worship the Lake as a Naga goddess, legend says that the Lake is formed with spiritual deeds from a Tibetan Yogini Kandro Yeshe Tsogyal in the late 8th century.

All the tours towards the Mount Everest base camp, western Tibet, and Nepal border will pass by the surface of the Yamdrok Lake making it one of the most popular Lakes in Tibet.

Yamdrok Lake is also one of the best day trips from Lhasa. Travelers can travel early in the morning to see the sunrise from Gambala Pass 4, 900 meters ( 16, 076 ft )

The stunning view of Yamdrok Lake can be seen from the mid-summit of Gambala Pass. Travelers can also travel down to the Lake to have time for a hike and explore the Lake.

Sightseeings located near the Yamdrok Lake

The surrounding of Yamdrok Lake is once an important retreat area so they are many monasteries and nunneries located near Yamdrok Lake.

Yamdrok Lake is also a gateway to Lhodrak town, the home of Yogi Marpa Lotsawa and the town where Yogi Milarepa had built a nine-story building by himself to purify his karmic debts in the 11th Century. Travelers can also read our article on Proverbs from Yogi Milarepa.

Tibet Travelers will share a few of the important monasteries and nunneries located near Yamdrok Lake.

One of the important nunneries in Tibet is Samding nunnery, located around 30 km from Yamdrok Lake.

Samding nunnery is founded during the 14th - 15th century.

Drubtob means Maha Siddha, someone who has achieved spiritual attainment.

In the 15th century, Yogi Drubtub Tangtong Gyalpo has already built more than 108 bridges in Tibet to make it convenient for the locals to cross the river.

Drubtob Tangtong Gyalpo is one of the greatest Tibetan Yogi.

Samding nunnery has a deep connection with him. The first Samding Dorje Phakmo, a great female Yogini was a princess who has renounced her worldly life and became one of the great Yogini in Tibet.

She is taken very precious for her spiritual diligence. Legend says for her whole life, she had never slept via lying down. In the day, she has a chair to sit and meditate at night, she will seat in the lotus position.

Nowadays Travelers can travel to Samding nunnery from Nagartse town, which is located around 20 km from the nunnery.

One of the bigger towns located near Yamdrok Lake is Nagartse town. Located around 40 km from Yamdrok Lake at an elevation of 4, 450 meters ( 14, 599 ft )

The town is popular for the Lunch break for Travelers who are traveling to Gyantse and Shigatse.

There is a 2-star accommodation with a few Tibetan restaurants available in Nagartse town.

From the summit of Gambala Pass, Travelers can see the stunning view of Mount Nojin Kangtsen, one of the 7, 000 meters mountains located near Yamdrok Lake.

The glaciers coming from these huge mountains are named Karo La glacier. Karo La is a high pass with an elevation of 4, 900 meters located right before the glacier.

There is also another stunning mountain opposite of the glacier named after Nojin Kangtsen. The nature of this area is beautiful with snow mountains, glaciers, rivers, and grassland. 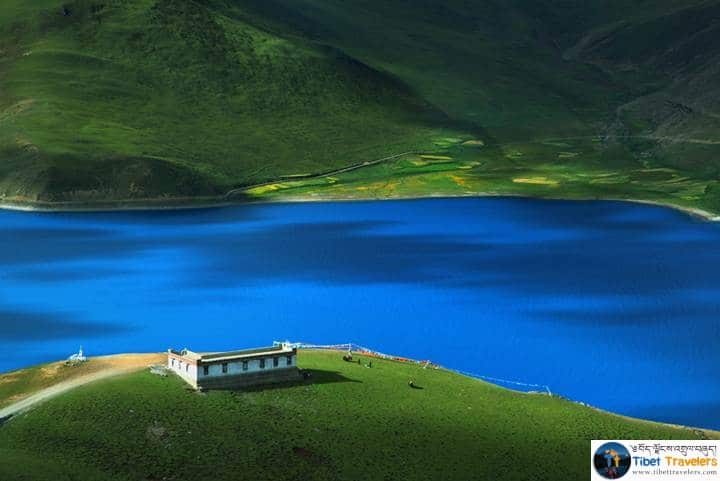 Ralung is the home of Tibetan Yogis.

Ralung is the main monastery of the Drukpa Kagyu school of Tibetan Buddhism. Ralung monastery is located around 18 km from the highway to Gyantse town.

The monastery was founded during the 12th century by a great Tibetan Yogi Jetsun Tsangpa Gyare.

He was one of the greatest Tibetan Yogi and one of my favorite.

These great Yogis claim to be beggars even though their mind is the Buddha, the richest.

Once during his retreat,  a Dakini came to him and gave him her shoes.

He said:  this is a blessing from Dakini, I can't wear it on my feet, I will take this blessing on my head.

Nowadays the Drukpa Kagyu school has a tradition of wearing a hat as a blessing.

Je Tsang Nyon was the one who had written the best biography of Je Milarepa.

Je Gotsangpa was the one who says take everything on your hat, stay at the lowest.

Je Drukpa Kunley had also sent a letter to the goddess of Lake Yamdrok, which was written in his biography.

Je Ling Repa has shown the locals a big fish in the Yamdrok Lake, who was an incarnation of a great Lama who had taken so many debts without repaying and was born as a big fish with so many small wounds eating its flesh as a karmic debt.

Travelers can read our article on merit is everything where we shared a short meaning of merit in Buddhism.

Yamdrok Lake is the home of Nomads. The medicine grass-grown near the Lake is one of the reasons for the growth of the nomadic culture.

Travelers can see the view of nomadic culture on the other side of the river.

They are two routes from Yamdrok Lake to Gyantse.

If Travelers travel the old route, Travelers can witness the true beauties of nomadic and another landscape view of the Yamdrok Lake and its surrounding snow and brown rocky mountains.

They are 2 ways to travel Yamdrok Lake

1. Travel from Lhasa to Yamdrok Lake.

2. Travel from Nepal Border or western Tibet to Yamdrok Lake.

The most popular way to travel Yamdrok Lake is traveling from Lhasa as a day trip or connection trip with other sightseeings.

For travelers who have a short time in Tibet, we highly recommend traveling to Yamdrok Lake as a day trip.

For travelers who are traveling to Mount Everest base camp, Nepal border, or western Tibet, we highly recommend adding Yamdrok Lake to the itinerary.

Travelers can stop near the Lake for more time exploring the Lake.

Around 50 km from Yamdrok Lake, Travelers can witness another Lake where the Hydropower is located. There is also a small ruin in the middle of that Lake where Travelers can stop for photos.

While traveling to Yamdrok Lake from Lhasa, Travelers can also witness the beauties of the Yarlung Tsangpo river, villages, and landscape.

Travelers can send us an email regarding traveling to Yamdrok Lake. [email protected]

One thought on “Yamdrok Lake”